Thoughts From the Once-A-Day Devotional Walk With Jesus

This week’s “thought” addresses a persistent, age-old, seemingly impossible to kill heresy. One that was used against Job by his “friends” (in the book of Job which most generally agree to be the oldest book in the Bible) and one that’s still parroted today (to one degree or another) in many contemporary, “Health and Wealth,” “Name It, Claim It,” or “Prosperity Gospel” circles (and others too I am sure). It’s the heresy of thinking that those who suffer are being punished by God or experiencing God’s wrath. It’s a spiritual virus that refuses to die, even though it is clearly rebuked by God as being wrong (Job 42:7)! 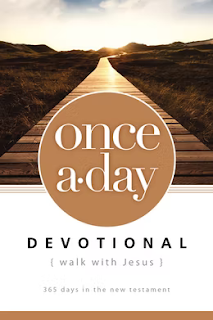 This selection comes to us from the, “Once-a-Day Devotional Walk with Jesus” published by Zondervan. Each day has a New Testament Scripture, a contemporary introduction to the topic which will be addressed, a quote about that topic from a well-known Christian from the past (today’s is by the great Protestant Reformer, Martin Luther), and they conclude with a prayerful admonition for action based on what has been discussed. I can attest it’s a helpful devotional if you are looking for one! Enjoy.

GOD’S PRESENCE IN TROUBLED TIMES
When we are judged in this way by the Lord, we are being disciplined so that we will not be finally condemned with the world.
I Corinthians 11:32

“Joseph in the pit. Job among the ashes. Jeremiah in the dungeon. Paul in the Philippian jail. Individuals God forgot about?

Quite the contrary! They were individuals in close communication with their Creator. Each learned that a child of God need never be alarmed at the presence of trouble when God is an ever-present companion. Martin Luther underscores this truth.

WALK WITH MARTIN LUTHER
“Reason holds that if God had a watchful eye on us and loved us, he would prevent all evil and not let us suffer. But now, since all sorts of calamities come to us, we conclude: ‘Either God has forgotten me, or God is hostile to me and does not want me.’

“Against such thoughts, which we harbor by nature, we must arm ourselves with God’s Word. We must not judge according to our opinion but according to the Word. First Corinthians 11 tells us that God disciplines those whom he intends to keep and preserve for eternal life – that he cannot be hostile to them, but that they must nonetheless suffer all sorts of trouble, crosses, and temptations. We should cling to such passages in times of temptation."

“Suppose a person has trouble from which he would gladly be relieved. If he thinks: ‘See Here! If I did not have this affliction, I would fall into this or that mischief; God is acting in my best interests, to keep me in his fear and drive me to the Word and prayer.’ It will clearly appear that God does not discipline us because he is hostile to us, but to show us his love.”

WALK CLOSER TO GOD
Father, I confess how frequently I view my problems as evidence that you have forgotten me, rather than as tokens of your constant watch and care over me. When troubles and trials cause me to doubt your goodness, help me instead to cling to your Word.” 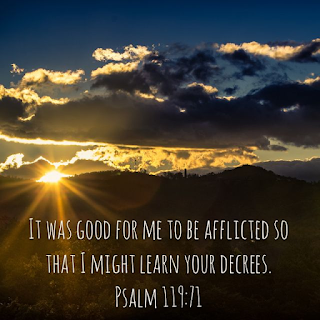 It does not take long before the Bible dismantles the idea (common among some religious people, who often struggle with a self-righteous or moralistic bent) that all who suffer (John 9:1-2), and often in intense ways like Job, are not suffering because God is mad at them, punishing them, has it out for them, has rejected them, or is venting His wrath on their sins. Could there be some who fall into that category? Undoubtedly. We do see examples of it in the Bible. But given the fact that God was revealing such knowledge to His prophets, and such inerrant prophets no longer exist, we do well not to proclaim what we cannot now know with any certainty at all.

Joseph spent 13 years in a prison cell seemingly forgotten by God. Job suffered in ways that are hard for us to imagine. Isaiah (says tradition) is the man mentioned in Hebrews who was “sawed in two.” Paul suffered with a “thorn in the flesh” that God refused to remove. In fact, in II Corinthians 1:8-10 Paul tells us of one time in his life when he and Timothy suffered hardships of such a great magnitude, that they were, “far beyond our ability to endure, so that we despaired even of life itself. Indeed, in our hearts we felt the sentence of death.” Did God hate Paul? Was God angry at him? Did Paul and Timothy’s great and obvious depression and emotional deadness inside mean God was punishing them? 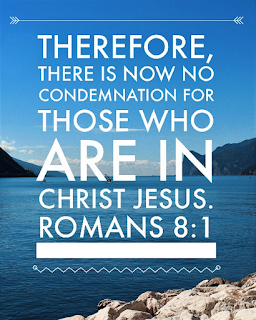 You know the answer – if you know the Gospel. “The Lord disciplines those He loves…” “God disciplines us for our good…” “If you are not disciplined (that is, if you don’t undergo trials) then you are illegitimate children and not true sons….” (Hebrews 12:1-13).

In fact, of people who were “tortured,” “flogged” “chained and put in prison” “stoned” “sawed in two” “put to death by the sword” “wandered around destitute, persecuted and mistreated” and “lived in caves and holes in the ground” the author of Hebrews says, “the world was not worthy of them” and “they were commended (by God) for their faith” (Hebrews 11:35-39). They were some of the greatest of all the great, suffering immensely, yet loved dearly by God at the same time. The same is surely true for many who suffer intensely today. 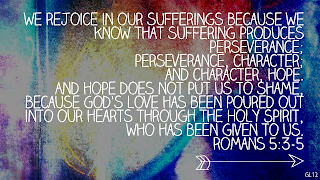